Lodi calls itself the Zinfandel capital of the world and deservedly so. According to the Lodi Winegrape Commission the region produces 40% of California’s premium Zinfandel. But the region is also home to more than 100 wine grape varieties. Nero d’Avola is now among those grape varieties thanks to Lange Twins Family Winery & Vineyards in Acampo. The 2014 Lange Twins Nero d’Avola is the winery’s first vintage of this Sicilian variety.

2014 Lange Twins Nero D’Avola — medium ruby-garnet in the glass with generous cherry and red rose aromas with hints of dusty earth. Red raspberry, cherry and blackberry flavors combine with backnotes of black tea and dusty earth. Tannins are drying and well integrated with the flavors. Bright acidity winds through the wine. The body is light to medium and the finish, which is moderate+ in length, includes tannins, lingering fruit flavors and stony minerality. 13% abv. $20

This wine has lovely fruit flavors, without being at all too ripe, and is balanced with bright acidity and nice tannins. I really appreciate its relatively low abv as well. And the price is not a typo, at $20 it’s a steal. In short, it’s really delicious and easy to drink on its own. But this lovely Nero d’Avola is a food wine as well. We enjoyed it with a wild mushroom pizza, recreating a pairing we enjoyed when we visited Sicily. The meal took us back to a balmy evening in Ragusa Ibla.

Lange Twins describes their winemaking style as hands off and after fermentation the Nero d’Avola was aged in neutral French and American oak for 18 months. As you drive into Lange Twins winery, the 3.62 acre Red Tail Vineyard is on your left. The Nero d’Avola was planted in 2012 and joins other red Italian varieties including Sangiovese, Aglianico, Barbera and Teroldego being farmed by Lange Twins in various Lodi locations.

My first introduction to Nero d’Avola came at a Sicilian wine tasting at a local wine shop in 2014. That tasting prompted us to plan a vacation in Sicily where we tasted Nero d’Avola many times. Now we have circled back to another local tasting of Nero d’Avola that has left me impressed. As much as I enjoy Zinfandel, I will continue to look for other varieties in Lodi to love. Bet I won’t have to look too hard. 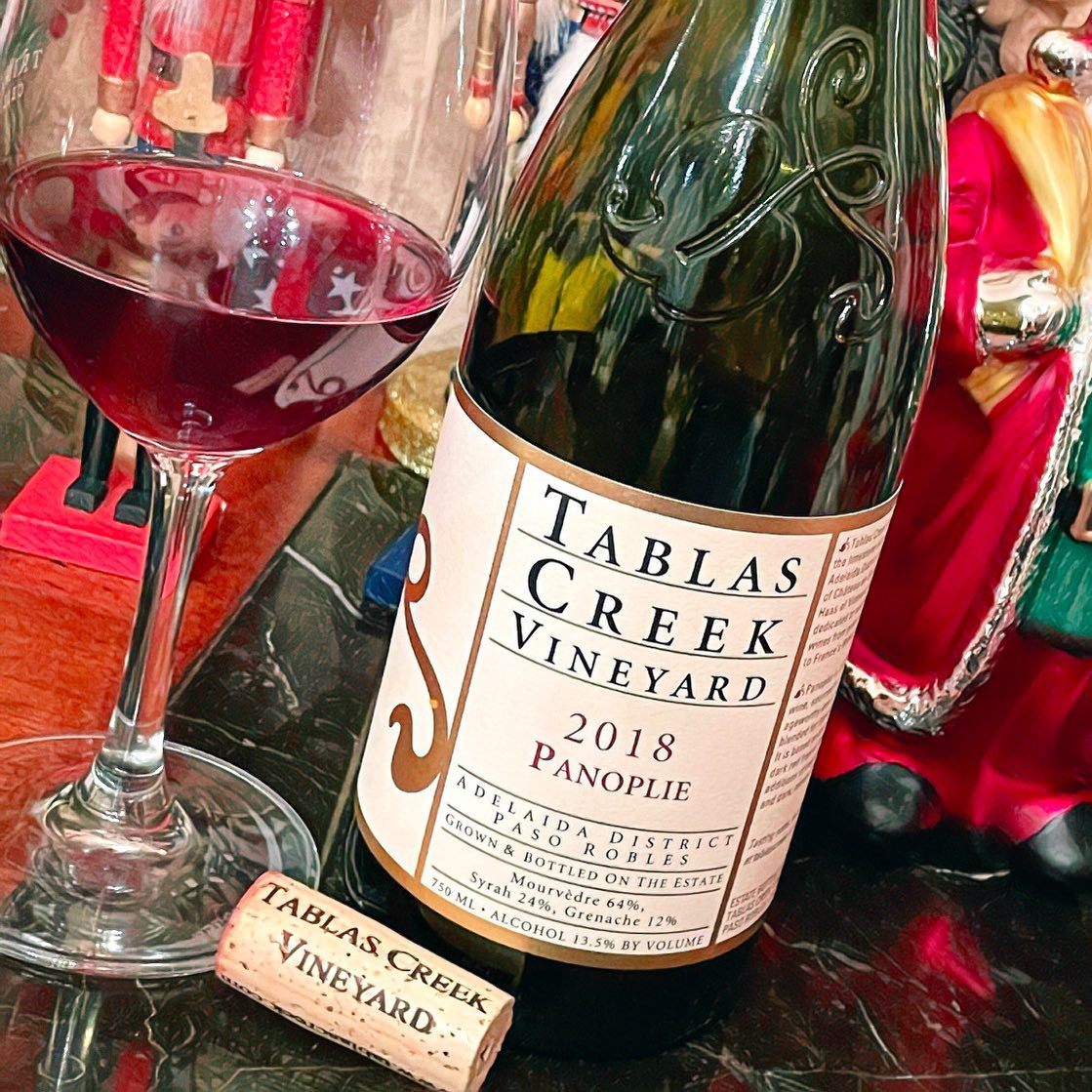 mspullthatcork
•
Follow
We are trying to change gears from Thanksgiving to Christmas this weekend. We might just succeed with a little help from the folks at Tablas Creek. 2018 Tablas Creek Vineyard Panoplie is full of brilliant red and dark fruit flavors, well integrated tannins, pleasing tension from lively acidity. Depth of flavor and only 13.5% abv. It’s a wine club wine that we first tasted when we visited the winery in July. My notes say it’s ageable, but clearly we failed on that front. Yep, I think I can depress the clutch and change gears without grinding them. Thanks @tablascreek 🍷 . . . #californiawine #pasowine #pasowinelover #drinklocal #regenerativeviticulture #biodynamicviticulture #mourvedre #syrah #grenache #redblend #rhoneblend #redwinelover #redwine #winetime #winefun #holidaywine #wineoftheday #instawine #wineoclock #winegeek #winenotes #winepassion #vinrouge #vino
View on Instagram |
1/9 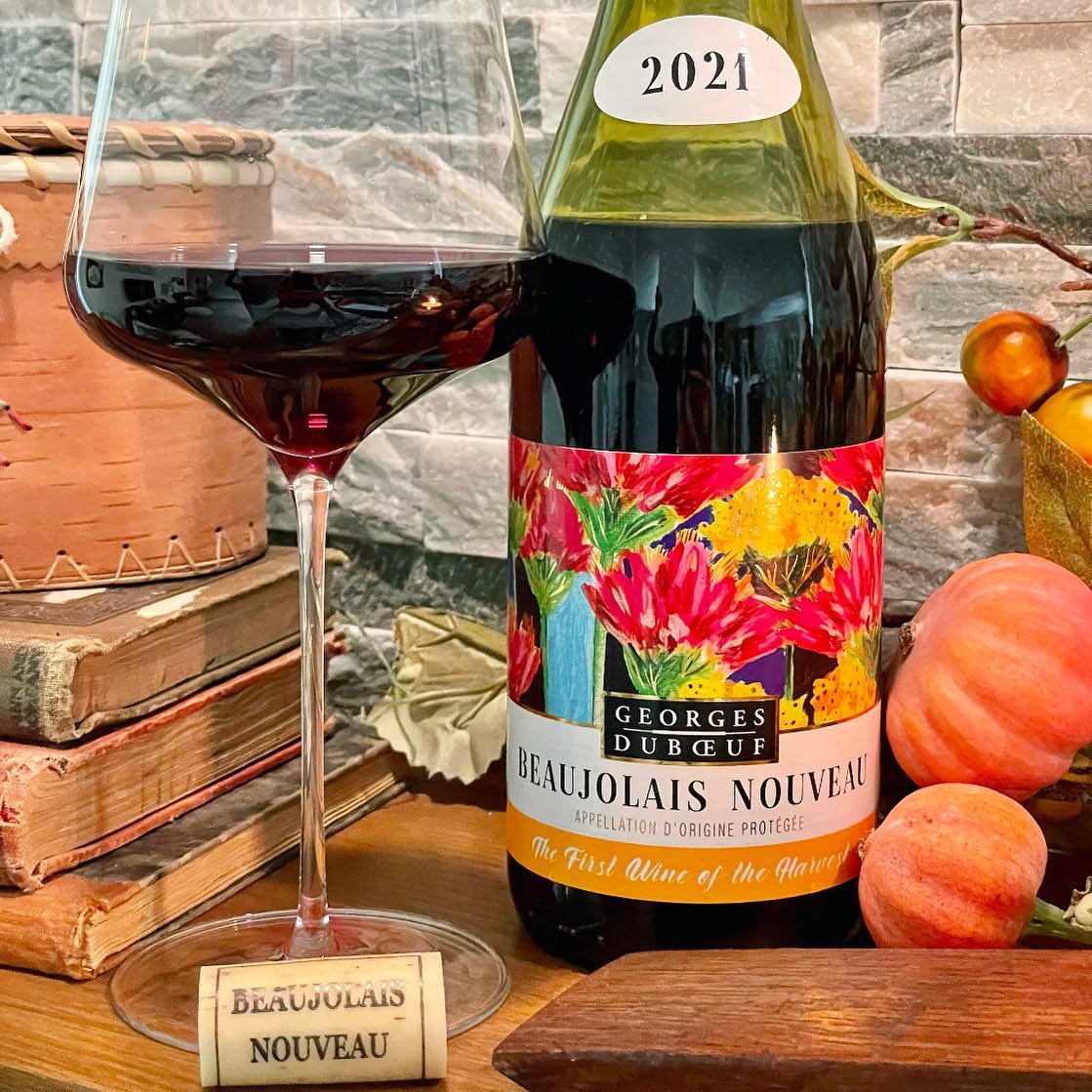 mspullthatcork
•
Follow
#sample The third Thursday in November, aka Beaujolais Nouveau Day, is here! Beaujolais Nouveau is made using Gamay grapes in a quick winemaking style that results in fruit-forward wines. They’re easy sipping and for me they’re the perfect lunchtime wine (not that I drink wine at lunch on a regular basis 😉). Today on the blog we share our tasting notes for the 2021 Georges Duboeuf Beaujolais Nouveau, a bit about the 2021 vintage and this year’s label artwork. And I also share my choice of lunchtime pairings if I were to be so indulgent as to sip Beaujolais Nouveau with lunch. Production this year in Beaujolais is smaller than usual due to crummy weather during the growing season, so don’t procrastinate. The wines are still very reasonably priced and will get you through the holidays in style. And they’re cheery, which is most welcome on a gloomy day like today. . . . #beaujolaisnouveau #beaujolaisnouveau2021 #beaujolaisnouveauday #firstwineoftheharvest #gamay #gamayzing #beaujolais #labelart #redwine #vinrouge #redwinelover #thanksgivingwine #thanksgivingcelebration #foodandwine #winepairing #winepic #winepassion #vinsdebourgogne #wineoftheday #winetasting #winenotes #winelover
View on Instagram |
4/9 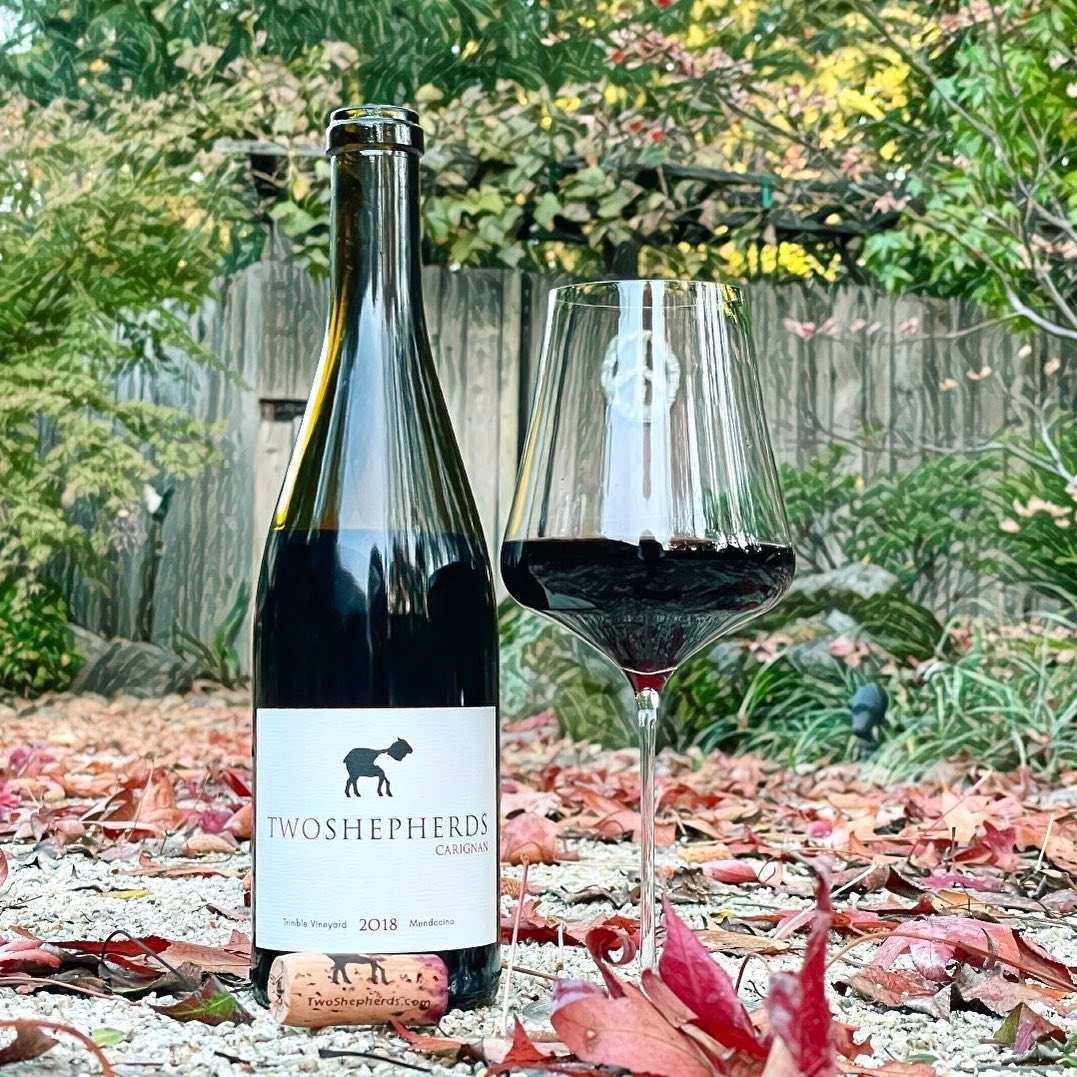 mspullthatcork
•
Follow
The views around Wilderness Safaris’ Damaraland Camp and in the Torra Conservancy go on forever. The red earth is punctuated by ash bushes, euphorbia and the occasional shepherd’s tree. Look in another direction and you will see jumbles of rocks of every color, mountains of all shapes and eventually the wide, sandy Huab riverbed. And there are vistas that are otherworldly. It is a landscape that is at the same time harsh and so beautiful it will move you to tears. The sight of a small family of desert-adapted elephants moving slowly across this vast, dry environment feels very lonely. Black rhino call this part of Namibia home as well. They are studied and kept safe through the efforts of Save the Rhino Trust whose Rhino Rangers are in the field every day. These animals are magnificent, even when viewed from a great distance. Giraffes wander the vastness and watch safari vehicles bouncing along the rocky roads with curiosity. Springbok head for the hills when they hear us coming. Guinea fowl, jokingly called ‘government chickens’ because no one owns them, wander in flocks. And we were fortunate to spot a family of double-banded sandgrouse with newly hatched chicks. It is amazing how many animals can exist is this difficult environment. Damaraland camp is less fancy than any of the other camps we stayed in during this trip to Africa, but that doesn’t matter at all. The individual rooms are more than comfortable, and on a chilly evening we were thrilled to find hot water bottles in our bed when we returned from dinner. Damaraland Camp put an exclamation point at the end of our best visit to Africa yet. You won’t want to miss it when you visit Namibia. . . . #Namibia #NamibDesert #desertlife #africa #thisisafrica #travel #photography #desert #instaphoto #igphotography #TorraConservancy #travelphotography #traveltheworld #notallwhowanderarelost #experiencetheworld #exploreyourworld #elephants #elephantlove #wildernesssafaris #damaralandcamp #ilovenamibia #expertafrica #visitnamibia #safaristyle
View on Instagram |
6/9

mspullthatcork
•
Follow
Namibia is all about wide-open spaces, interesting geology, red dunes of the ancient Namib Desert and the night sky. We found it was the perfect counterpoint to the lushness of Botswana’s Okavango Delta and it is one of our favorite places on Earth. Our first stop in Namibia was Little Kulala in the 27,000-hectare Kulala Wildernesses Reserve near Sossusvlei. Accommodations were more than comfortable and the food was delicious. And there is an underground wine cellar where you-know-who had dinner. Heavy rains at the beginning of 2021 have the landscape looking almost lush, even in this harsh, desert environment. We saw many more springbok and oryx than on a previous visit. Our time at Little Kulala was enriched by Markus’ guiding; his knowledge of the area’s flora, fauna and geology is extensive. And his knowledge of the night sky is unsurpassed. He quizzed us on Africa’s big 5, little 5 and the ugly 5. There was no slacking off in his safari vehicle. Our morning in Sossusvlei began looking for footprints in the sand at a stop along the way where we spotted the pretty Dune Lark, endemic to Namibia’s dunes. Later in the morning, it was Markus’ easy manner that encouraged us to the top of Big Daddy, the 325-meter dune that provides a sweeping view of Deadvlei, Hiddenvlei and way beyond. And we practically had Big Daddy all to ourselves. We enjoyed an early-morning hot air balloon ride, in spite of the 4am wakeup call, and the breakfast accompanied by sparkling wine that followed. Sunsets here are unsurpassed and don’t forget the night sky when you’re here. You must visit Namibia. . . . #namibia #visitnamibia #travelnamibia #ilovenamibia #africatravel #explorenamibia #idreamofafrica #littlekulala #sossusvlei #sossusvleidunes #bigdaddydune #deadvlei #wildernesssafaris #expertafrica #onsafari #safarimoments
View on Instagram |
7/9

mspullthatcork
•
Follow
Mombo Camp was our final stop in the Okavango Delta. This Wilderness Safaris camp is the perfect combination of luxury, abundant game viewing, beautiful and varied scenery and outstanding service. The perfect way to end our stay in Botswana. The weather started off hot, then cooled with rain before warming again. We had many leopard and lion sightings thanks to Ollie’s tracking skills. For the first time we watched them do more than sleep. And we saw so many birds. It was such a pleasure to be guided by someone so skilled who is also a photographer. Alfred, who a certified sommelier, and chef Tonderai, create fabulous food and wine pairings - requiring long discussions and tastings late into the night. No one in camp has more fun than they do! As #winelovers we appreciated the perfect pairings they created. Botswana’s Okavango Delta is a paradise. The landscape is varied and beautiful even when the water is not at its highest. And the wildlife viewing is outstanding. Camp staff have been financially impacted by COVID. Many were at home without income for a year or more. Even now not all camps are open and there are not many guests in some camps. All travelers must have a negative COVID PCR test before entering the country. Camp staff are masked and tested before coming to camp. And Wilderness has facilitated COVID vaccinations for staff and their families. The people need us to visit. And when there are no tourists visiting, animals are at risk through increased poaching pressure. This is an excellent time to visit Botswana. . . . #botswana #okavangodelta #wildernesssafaris #wearewilderness #visitbotswana #mombo #mombocamp #idreamofafrica #onsafari #botswanasafari #wildlifephotography #safarimoments
View on Instagram |
8/9

mspullthatcork
•
Follow
Every Wilderness Safaris camp has its own feel and charm. DumaTau is luxurious and comfortable but does not separate you from the scents and sounds of the wild. The sounds of the African night are extraordinary at DumaTau. The camp is located on Osprey Lagoon along the Linyanti River between two elephant crossings. Rooms are connected to the central outdoor dining area, bar and fire pits by raised walkways. We saw countless elephants using these ancient crossings in small groups and larger family groups. The older elephants help the little ones swim across the river and we often watched juvenile males wrestle with each other as they completed the crossing. Truly, this is a magical experience. The Linyanti Wildlife Reserve, on the northernmost fringe of Botswana, is rich in wildlife and the habitat is varied. We enjoyed driving safaris, a boat safari to photograph elephants swimming the river (at a respectful distance) and a walking safari. Viewing animals on foot is very different than from a vehicle. We were guided by Peter, an experienced and knowledgeable guide, who gave us a truly memorable experience. He spotted leopards, lions, many birds, countless elephants and he even found a chameleon - something I’ve long wanted to see in the wild. We saw the first newborn impala of the season. I felt very emotional leaving DumaTau and we cannot thank Peter enough for the quality experience. Follow Peter on Instagram, @petermoutloatse, for a closeup look at the area and it’s animals. Then come to Botswana! . . . #botswana #visitbotswana #okavangodelta #wildernesssafaris #wearewilderness #dumatau #dumataucamp #ecotourism #elephants #wildlfe #botswanasafari #explorebotswana #safarimoments #linyanti
View on Instagram |
9/9
View on Instagram